Imagine. Imagine a setting pandering to each one of your senses. After a few drops of rain, the earth smells heavy and fertile. Exotic fruits and spices tickle your taste buds. The jungle in its fifty shades of green surrounds you, its pregnant..... 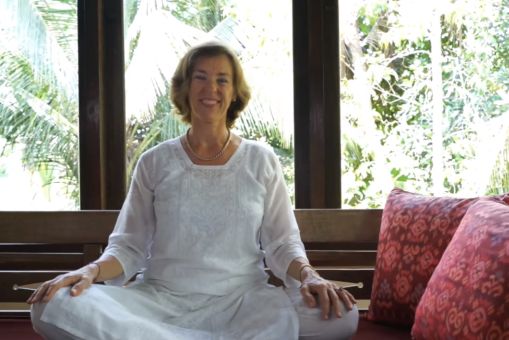 Imagine. Imagine a setting pandering to each one of your senses.
After a few drops of rain, the earth smells heavy and fertile. Exotic fruits and spices tickle your taste buds. The jungle in its fifty shades of green surrounds you, its pregnant lushness set off by vivid flowers, brightly-coloured like precious stones. The heat lies heavily on your skin, drops of perspiration trickle down your neck to land between your breasts. Cooled by the sound of constantly splashing water, whilst somewhere a rooster crows.

We've come to Kumara Bali to learn about the five-element theory, about Ayurveda. Ancient knowledge originating in the Himalayas some five thousand years ago, it is as relevant to us now as it was then. As humans we haven't changed. This knowledge does not seek to change nor to prove, merely to heal.

Day I starts at 6.00 am with a Homa, performed by one of the Ayurvedic doctors, here to teach us. It is a beautiful fire ceremony, to purify and cleanse us.
The first of our daily yoga sessions has us looking out over a narrow ravine. As teacher Wayan strikes the gong - once, twice, three times - I find myself watching a flock of ducks, marching single file along the opposite edge. Followed by their herder, waving a long bamboo pole with a flag on it. Every day, whilst the gong is being sounded, I find myself watching this same procession. 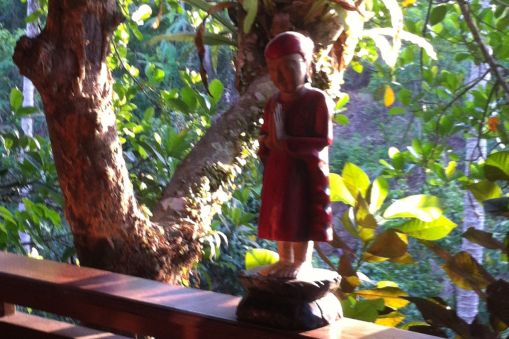 Ayurveda is so practical, there's even a daily routine, or Dinacharya in Sanskrit, to start you off. Interested? Here we go:
start by getting yourself a tongue scraper and use it to scrape all that gunk off the back of your tongue. It's undigested matter, aka ama in Sanskrit, and is caused by anything you ingest, either physical or emotional.
Brush your teeth, splash water on your face and now drink a glass of water, room temp. In cold weather it can be luke warm.
Then take a mouthful of sesame-seed oil (the untoasted kind, you don't want to smell like a Chinese take-away!) and swish it around your mouth.
Meanwhile you're going to give yourself a five-minute massage, again using sesame-seed oil. During cold weather you can warm it up. Initially it will give you lovely skin, reducing the effect of age-spots. Over time it will penetrate your joints, taking away creaking, stiffness and pain. And since the skin is the organ most exposed to the air element, it will reduce the bio energy comprised of space and air, called Vata. This is responsible for memory-loss, insomnia, lack of concentration, dizziness, bloating. And did I mention memory-loss (hahaha)?
Now you're ready to do some yoga and pranayama.
Bathe.
Have your breakfast, preferably no later than 8am.

Then comes purgation day. A purgation reduces the fire element, the bio-energy known as Pitta in Ayurveda. All week we have been preparing for this day by drinking ginger tea and other ones to gather excess fire. We take the purgative powder in the form of a tea, during Vata time, so by 6am. And return to our rooms to see what will follow.
The results are amazing. One man gives up smoking. A woman stops drinking coffee. Everyone looks bright-eyed and bushy-tailed the next day. Rejuvenated.

By the time we leave, even the most sceptic are converted. One, working in finance in NY, has adopted not only the daily routine, but has adapted his diet. "If I go for something," he says, "then it's all the way."

And at our last dinner together, I overhear two local men talk in Balinese. All I can make out is 'Vata, Pitta, Kapha' and 'Abhyanga', the Sanskrit word for massage.